Using a keyword or criteria search, the reader can consult and download different types of publications produced by the Missions Étrangères de Paris (MEP) between 1840 and 1962:

Mostly published in Paris but also in Vannes, Sens, and Lille, this bimonthly journal promotes the apostolic, social, and scientific works of the MEP alongside French supporters of the institution.

The whole journal is digitised and is available on the Gallica website.

This monthly brochure published by the MEP press in Hong Kong serves as an internal link between missionaries.

The Bulletins from the years 1922 to 1941 are also available on the Gallica website.

These circulars were addressed annually or biannually to the missionaries by the directors of the Paris seminary (until 1921), and then by the superior of the MEP, in order to inform them about the major news concerning the institution in Europe.

The MEP reports, delivered annually to Rome, congregate reports of the activities undertaken by each organism of the Society. Originally (in the years 1840 to 1859; 1868-1869; 1886), the annual report was a simple “compte-rendu des travaux” (a statement of the works performed. From 1860 onwards, the reports broadened their scope, including numerous types of documents: 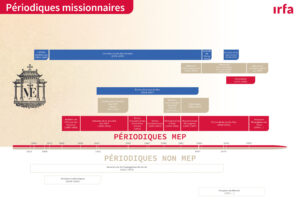 Scheme summarising the titles successively published by MEP since 1840