Feedback on the conference “Documenting and Describing Asian Languages”

From January 26 to 28, 2022, INALCO hosted the colloquium “Documenting and Describing Asian Languages: History and Epistemology”, organized by the Société d’histoire et d’épistémologie des sciences du langage (SHESL) in partnership with the IRFA.

This colloquium addressed, from a historical and epistemological point of view, the documentation and description of Asian languages.

As part of this event, three conferences were held to highlight the work of the MEP on the languages of Korea and Vietnam, given by Sung Do Kim (Korea University), Thi Kieu Li Pham (Hanoi University) and Louise Pichard-Bertaux (CNRS IrAsia, AMU), researchers in connection with the MEP.

On Friday afternoon, January 28, a round table was held at the Missions Étrangères de Paris (28 rue du Bac, 75007), devoted to “missionary linguistics today”, around which four MEP fathers who have carried out or are still carrying out translation work in the languages of their mission countries, were able to give their testimony: Frs. Lucien Legrand, Landry Vedrenne and Damien Fahrner, and Mgr Anthonysamy Susairaj.

Fr Lucien Legrand, missonary in India, was a teacher at the Saint-Pierre of Bengalore’s Seminary. From the end of the 1950’s, he worked on the translation of the Bible in tamil language.

Fr. Landry Vedrenne, at his arrival in Taiwan, has studied taiwanese and mandarin, and today is realising a thesis on the sino-vatican relationships during Pie XII’s pontificate.

Mgr Anthonysamy Susairaj is missionary in Cambodia too, wher he studied khmer language. He is also apostolical administrator in Kampong Cham.

The sharing of their rich experience brought the three-day conference to a close by raising the linguistic and methodical issues that missionaries may face while during their missions. 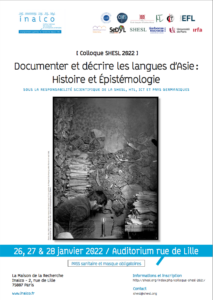