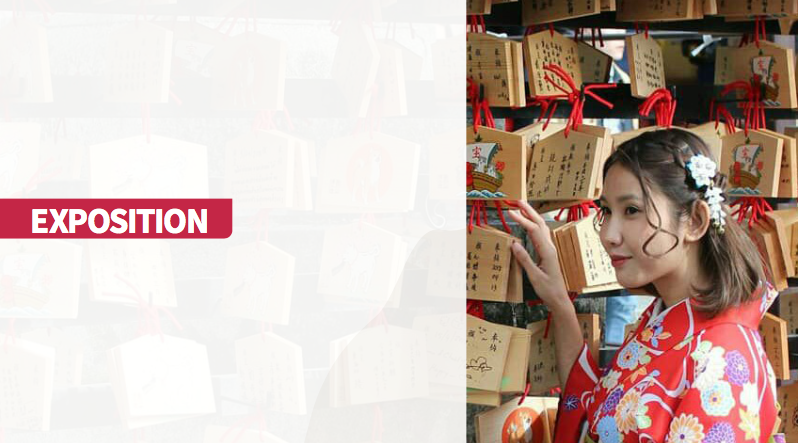 From 11 March to 1 September 2022, the IRFA hall will host a new exhibition on the ema collection of Fr. Antoine de Monjour. 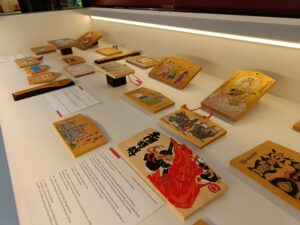 Antoine de Monjour is a member of the Foreign Missions of Paris. Originally from the diocese of Versailles, he became priest on 27 June 1992 and left for his assigned mission: Japan. Recalled to Paris in 1998 to sit on the MEP Permanent Council, he returned to Japan in 2010 as a priest serving the diocese of Saïtama.

“During my first visits to Buddhist temples and Shinto shrines, I bought an ema out of curiosity and sent it to my mother in France, with an explanation, a bit like an object of curiosity… She was very interested and so I got into the habit of obtaining the ema or emas of the new places I visited, indicating on the back in French the name of the site and possibly with whom and when I had made the visit.  My mother began to hang these ema in her home… She gave me what became a ‘collection’ when she moved in 2016. I continued to search for ema anyway. And it seemed more useful to me to share this interest in these objects with the IRFA than to keep them personally in a box…”

These ema are painted wooden boards, whose traditional pentagonal shape recalls the façade of a Shinto shrine with a double-sloped roof or a stable. 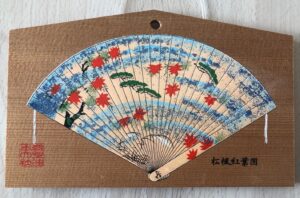 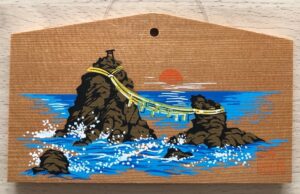 Ema, which name is often translated into the term ‘ex-voto’, have a design on the obverse side and a space on the reverse side where the worshipper can write his or her wish, request or thanks. They are offered in Shinto shrines (Jinja or Jingu) and in Buddhist temples.

Their literal meaning of “painted horse” has long given credence to the thesis that ema are the result of the tradition of offering real horses to shrines. This offering was too costly for the ordinary devotee and was replaced by the gift of an image representing this animal: the e-ma. This historical explanation is reinforced by the importance of the horse in Shinto rituals. But another theory, arguing from the very diverse form of these tablets and the common representation of parts of the human body, concludes that they are above all supports to bring the attention of the divinities to the fulfilment of a wish, generally for healing. 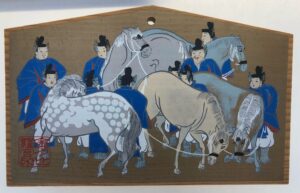 Today, these boards, which cost between 500 and 1000 yen (about 4 to 8 euros), are still very popular with the faithful but also with tourists.

Antoine de Monjour gave his ema collection to the IRFA in 2021. Of the 134 original pieces that it currently contains – as it continues to grow – some 50 entities are presented here. 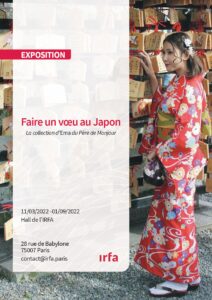